In September 2016, a year after getting married, my husband and I finally went on our honeymoon. We settled on New Zealand, not only because we got a screaming deal on airfare, but also because it was on our travel “wish list”. We planned to do a variety of things, from lounging around in hot springs to abseiling into caves, but one of the activities I was looking forward to the most was embarking on the Tongariro Alpine crossing. The Tongariro Crossing is often referred to as one of the world’s best day hikes, so our expectations were pretty high, but when we arrived in Auckland the weather was terrible. We held out hope that the weather would clear up before our hike as we toured through the Coromandel peninsula, Tauranga, Rotorua and Taupo over the few days. Unfortunately, the rain persisted, but we decided to brave the weather and go for it anyways. 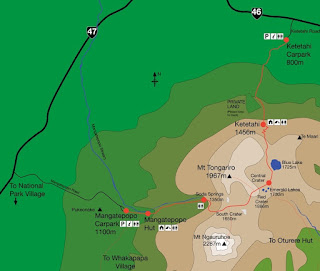 The Tongariro Crossing is a 12-mile one-way trek, so you either need to pre-park a vehicle at the end of the hike and hitch a ride to the trailhead, or hire a shuttle (which is the option we chose).  When we arrived at the information center in Taupo to book a shuttle we discovered the weather had been so bad over the last week that they were not bringing people to the trail at all. Lucky for us, the day we planned to hike was the first day that they would be operating again. The woman who booked our seats on the shuttle also assured us that trainers would not be adequate for the hike, and encouraged us to rent boots.  We didn’t bring our own boots because we packed super light. New Zealand also has a pretty strict policy regarding bringing used outdoor gear into the country, and didn’t want to risk forfeiting expensive equipment. 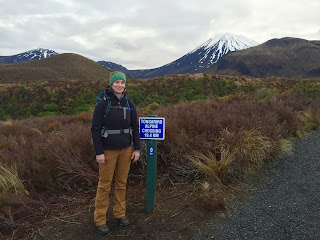 The next morning Matt and I woke up early to drive from Taupo to Tongariro and catch our shuttle to the trailhead. We hit the trail around 8:00 AM. The first 250 meters of elevation gain were gradual, however the next 500 meter climb proved to be much more challenging. The climb was worth the effort, because the next section of the hike was across a volcanic caldera (that’s right we were hiking up and over an active volcano!). At this point you could branch off and summit Mt. Ngauruhoe (Mt.Doom from Lord of the Rings), but with the current weather conditions the trek was considered extremely dangerous without mountaineering experience. 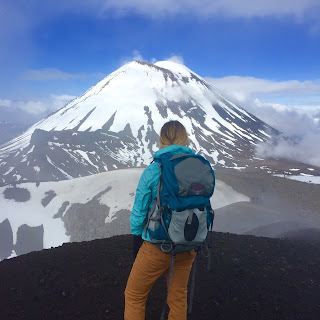 Matt and I continued along the standard route, hiking past smoking hot rock and icy blue alpine lakes. 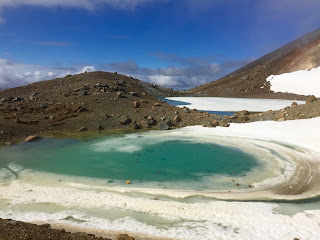 It was a bit cloudy and drizzled rain for some of the hike, but overall the weather held out for us. The day of our hike was about the only day during the entire 2-week stay that it did not rain heavily, so we really lucked out. I made it about two thirds of the way though the hike before I decided to switch out the rental boots for my trainers, and in retrospect, I wish I has just worn them the whole time. The slight dampness I would have experienced in my trainers probably would have been less of a burden than hiking 12 miles in boots that had been broken in for someone else’s feet.  After about 4 hours of hiking we made it down to the Ketetahi Carpark on the otherside of the volcano. We spent the next two hours talking to other hikers and eating some snacks until our shuttle arrived. 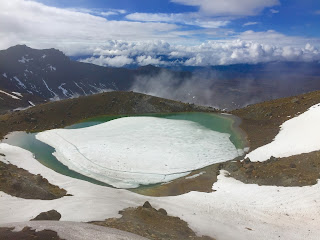 It’s been a year and a half since our trip to New Zealand, and I still think that the Tongariro Crossing was my favorite part.  It is a popular hike, but the crowd really starts to thin out once you begin to gain elevation, and even so, it is a great experience to share with other travelers and outdoor enthusiasts from all over the world.