The Conservation Legacy of President Roosevelt

For this blog, I’ve decided to do things a little differently. Having a degree in history, I’ve always enjoyed researching and writing about the exploration and discoveries made in North America, such as the Lewis and Clark Expedition. However, as America moved into the 20th century, few people had a greater impact to the conservation movement and preservation of our nation’s most beautiful and significant places than President Theodore Roosevelt.

As a young boy, Roosevelt’s fascination with nature began with taxidermy. His family traveled across Europe, where he found that hiking and physical activity helped minimize his asthma. He attended Harvard, where he excelled in biology and became an accomplished naturalist and ornithologist. After the death of his wife, Roosevelt moved to the Dakota Territories, where he became a rancher, hunter, and author. He realized the negative effects of overgrazing and formed the Boone and Crockett Club, whose goal was to preserve large game animals and their habitats. Before his presidency, Roosevelt became known for his famous military actions during the Spanish- American War. (He was posthumously awarded the Medal of Honor in 2001).

Perhaps Roosevelt’s greatest and most well-known contribution during his presidency were his policies towards conservation. He created the US Forest Service and worked closely with its chief, Gifford Pinchot. He was invited by John Muir to travel to Yosemite National Park in 1903. Sharing a common passion for nature, they realized the importance of preserving unique places like Yosemite and the benefits it would have to wildlife. Roosevelt was not afraid to use executive orders to preserve over 150 million acres of land. By the time his presidency was over, he established five national parks, 18 national monuments (including Grand Canyon and Lassen, which would become national parks), 51 bird reserves, and 150 national forests. He also signed the Antiquities Act, allowing himself and future presidents to create national monuments from federal lands.

Today, President Roosevelt’s conservation legacy can be found in the 230 million acres of land he helped establish, as well as six national parks. Reading Roosevelt’s quotes, you can tell his passion for the natural world. His desire to preserve the beautiful places of the west as what they were, natural and untouched by man. However, perhaps his greatest realization/contribution was the importance of preserving these places for America’s future generations to see and enjoy.

“There is a delight in the hardy life of the open. There are no words that can tell the hidden spirit of the wilderness that can reveal its mystery, its melancholy and its charm. The nation behaves well if it treats the natural resources as assets which it must turn over to the next generation increased and not impaired in value.”

10 Year Partnership with Leave No Trace!

Did you know that Nevada Outdoor School has been a partner organization with Leave No Trace for TEN YEARS?! That’s right! This year is our tenth year collaborating with Leave No Trace to provide safe and responsible recreation to both youth and adults.

Today, Nevada Outdoor School incorporates Leave No Trace in a variety of ways from educational outreach to Trainer Courses, Awareness Workshops, lessons with local schools and other organizations, volunteer events, and more. The education staff all go through a Leave No Trace training and in turn, facilitate Leave No Trace lessons in local classrooms and at all of our summer camps. These lessons help teach the kids how to connect, respect, protect, and share the love for the outdoors. We do this through exploration, education, and stewardship. In addition, we also have conducted Leave No Trace educational outreach events all across the state of Nevada as part of our Road Show booth. This fun, interactive booth helps educate youth and adults about the importance and value of Leave No Trace and responsible recreation through hands-on activities.

Thank you Leave No Trace, on being the leader in promoting responsible outdoor recreation! 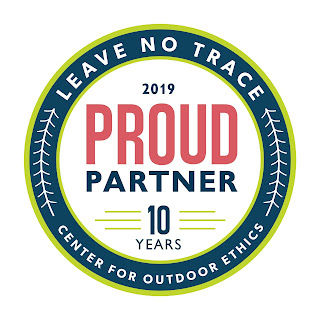 Check out their blog about all their long lasting partnerships!
https://lnt.org/15-years-of-partnership/
Posted by Jive at 9:55 AM No comments: