Get the Coals Hot!

During a normal year, Nevada Outdoor School would be gearing up for our annual fundraiser, the Buckaroo Dutch Oven Cook Off (affectionately known by NOS staffers as “DOCO” said, “doh-co”), for the 12th time!  Although typically held at Vesco Park in Winnemucca, this year it will be a virtual event, held on Saturday, September 12th from 2:00 – 5:00pm via GoToMeeting.  For more information on how to participate, how to donate, or just watch, visit our website at NevadaOutdoorSchool.org. 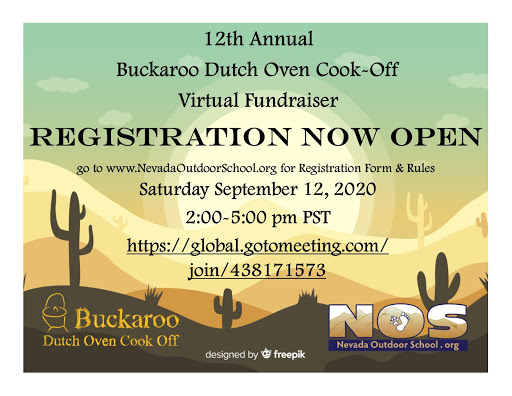 A Dutch oven is a thick-walled cooking pot with a tight fitting lid usually made from cast iron.  Dutch oven cooking has been around for thousands of years, dating back to 4000 BC and referred to as cauldron cooking.  In America, cast iron pots began arriving by the mid-eighteenth century after being patented in 1708 from ideas gathered from foundries in Holland.  The design was improved with a tight lid and a flared edge to help hold the coals on the top.  The Dutch oven has a rich American history.  They were very practical pieces of equipment on trail-drives or for mountain men and prospectors.  The lid kept the dust out and the heavy pot would not blow over in the wind.  In addition, it is possible to efficiently feed a lot of people using a Dutch oven.  Delicious, nutrient dense meals with a variety of components can be cooked in a single oven. 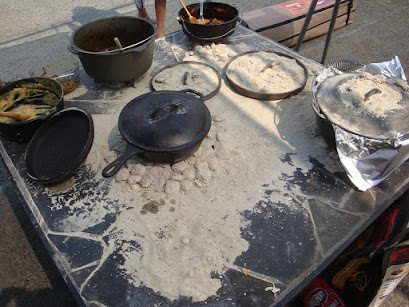 In modern times, coals, or BBQ briquettes, are used to heat the Dutch oven.  Because the Dutch oven cooks with the hot moisture and pressure that builds up inside, usually a 300 to 350F temperature is sufficient to bake most any dish.  Unlike other forms of cooking, the integrity of the food remains intact (for example, no dripping grease or loss of water), and it is therefore the best tasting food around!  You can also roast, braise, pan-fry or even deep fry in a Dutch oven by varying the amount of coals used to adjust the temperature.

For baking, coals are applied to the top and the bottom to provide an even heat inside the pot.  Generally speaking, to cook at 350 F, the number of top coals is your oven size (in inches) plus 3 briquettes.  The bottom heat is the oven size minus two.  (For example, in a 10-inch Dutch oven, you would want 13 coals on top and 8 coals on the bottom to establish the best baking temperature).  It is important to check your dish when it is about 2/3 way done as you may have to remove some bottom coals to prevent burning.  However, the best way to determine when the dish is done is by using your nose, especially when baking cakes, breads and brownies.

In preparation for NOS’s virtual Dutch Oven Cook-Off fundraiser on September 12th, several members of the Nevada Outdoor School team gathered to practice and demonstrate their skills for a video you can watch at nevadaoutdoorschool.org or on our YouTube Channel.  In the video you will see a variety of delicious one pot meals and desserts that were prepared and tasted including a savory roast with thyme cobbler biscuits on top, a bacon wrapped turkey breast with mixed vegetables, Mexican meatball soup, loaded brownies and a cherry-swirled cheesecake (our mouths are watering just thinking about them!) In the video, NOS’s Executive Director represents the International Dutch Oven Society category, cooking three dishes: a main dish, bread and dessert.  Many serious Dutch oven enthusiasts belong to the International Dutch Oven Society.  You can learn more at IDOS.org.   In past years, the event in Winnemucca served as a sanctioned Society event, and local and visiting participants have advanced on to win a variety of prizes at national and international events.

If you want show off your skills, give Dutch oven cooking a try or just learn more about cooking in a Dutch oven, join us on September 12th!  Teams will be live-streaming their cooking and there will be instructional videos throughout the event. While we won’t have the opportunity to smell or taste other people’s dishes, we will be able to admire the delicious food, pick up a lot of pointers and see different techniques demonstrated.  Contact Melanie Erquiaga (775-623-5656 or info@nevadaoutdoorschool.org) to register or go to www.Nevadaoutdoorschool.org to view the official event Rules and Regulations and to get a Registration form.

Cooking outside can be a lot of fun.  Gather your friends and family, find a new recipe or showcase your favorite, and give Dutch oven cooking a try!  Don’t know where to start?  Three great Dutch oven cook books by Colleen Sloan are, “Log Cabin Dutch Oven”, “Cabin Cooking: Rustic Coat Iron and Dutch Oven Recipes”, and “Log Cabin Grub”.  You can order yours today at logcabingrub@aol.com.  Remember to also think about fire safety and practice “Leave No Trace” when cooking outdoors.

Get outside and cook; fresh air, tasty food and sunshine is good for all of us!

Places to Go! The Buckskin and Table Mountain Loop Trails

A visual inspection of the northern Nevada hills quickly reveals trails galore to an untold number of destinations well beyond the beaten path.   We live in a state where All-Terrain Vehicles (ATVs) and Off-Highway Vehicles (OHVs) are part of the culture for many individuals.  Families plan gatherings and time spent together based on the best trails and where adventure awaits.

The Santa Rosa Mountains in Humboldt County are a beautiful place to explore on ATVS/OHVs.  Two trails that are readily available just 45-minutes north of Winnemucca in the Santa Rosa Range and the Humboldt-Toiyabe National Forest are the Buckskin and Table Mountain ATV Loop Trails.  These trails were improved over the past several years through a generous Recreational Trails Program (RTP) grant from Nevada State Parks in partnership with Nevada Outdoor School (NOS), AmeriCorps, the US Forest Service, and the Northern Nevada ATV Association (NNVATVA).

In addition to Humboldt County being a great place for OHV/ATV recreation, it is also the top agriculture producing county in the state.  While the Santa Rosa Mountains are a great place to ride, they also have many grazing allotments that the area ranchers pay the Forest Service to graze their cattle on.  Ranchers use fences and gates to manage their allotments and cattle.  The Buckskin and Table Mountain area of the Santa Rosa Range have many allotments and contained numerous gates crossings that needed to be opened and/or closed when traveling through to keep cattle where they are supposed to be.  Off road recreationists and hunters were being blamed for leaving gates open and the cattlemen were not happy with the Forest Service’s ability to monitor and prevent the gates from being mismanaged.  This is not an unusual situation when there are multiple-uses on a plot of land. 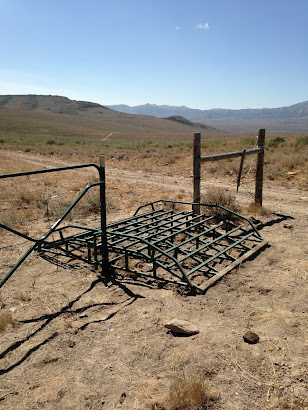 In other western states, fabricated steel cattle guards have been installed at gate crossings which enable ATV and OHV users to pass over the ramp style cattle guard without having to stop to open and close the gates.  This system allows a quicker and easier ride for recreationists while managing gate systems and keeping cattle where they are supposed to be.  This was a win-win implementation!

Through the RTP grant, an AmeriCorps member with NOS worked with the US Forest Service and the NNATVA to install these fabricated steel cattle guards at all of the gate crossings on the Buckskin and Table Mountain loops.  Now, off-road enthusiasts can enjoy uninterrupted riding on the larger 27 mile Buckskin loop and the smaller 8 mile Table Mountain loop, making it a wonderful OHV/ATV destination for individuals and families.  Lye Creek Campground, about 6 miles south of the Buckskin route, serves as an excellent base for multi-day exploration of the Santa Rosa Mountains. 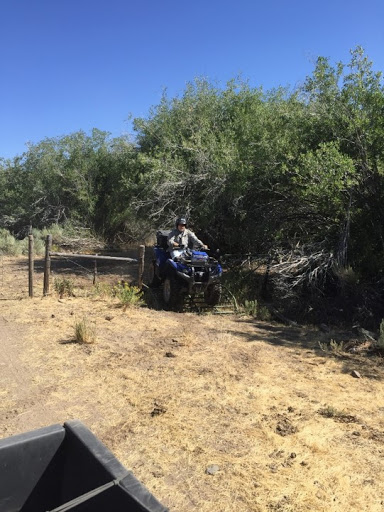 While being outside to have fun and explore is a good goal, safety should always remain an important consideration.  On ATVs/OHVs safety considerations include the steepness of the slopes, the surface material, how rutted the trail is, trail access and how many/what kinds of other trail users there are.  Not all ATV or OHV routes are appropriate for all riders, know your limits and research the route you plan to take ahead of time.  Remember to research and follow Tread Lightly! principles while riding to help keep our beautiful recreation areas healthy and open for future use.

In an effort to continue to educate and find additional win-win solutions, Tread Lightly! and its partners have several national initiative working to protect and enhance recreation access and opportunities by promoting behaviors that maintain healthy ecosystems and thriving populations of fish and wildlife. Programs such as Ride On Designated Roads, Trails and Areas and Respected Access is Open Access focus on education so that trails remain open while caring for the natural resources found in our local area. To learn more about Tread Lightly! visit their website at treadlightly.org.

Stop by the Nevada Outdoor School Elko Office at 2363 North 5th Street, #102 to pick-up a map and beginning planning your next adventure.  Get outside; fresh air and sunshine is a good for all of us!