Now that we are knee deep in spring, it is time for us to trade in our winter coats for our raincoats and our snow boots for our rain boots! We may live in The Great Basin Desert; one of the hottest driest regions in the country, but that does not mean we experience a permanent dry spell. In fact, as we transition from spring to summer, we will begin to experience some of our wettest months!

Typically, during this time of year, the Ruby Mountains will receive the remnants of storms rolling in from the Pacific Coast. Between these storms and  warmer air temperatures,  snowfall will transition into rainfall.  Snow in the Ruby Mountains will begin to melt and provide fresh run-off to empty streambeds or shallow depressions on the valley floor. These low-lying areas are labelled as intermittent or ephemeral streams. 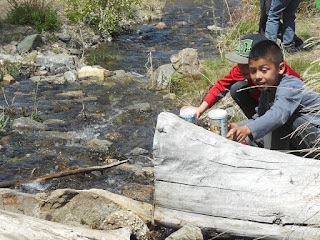 Unlike Ruby Lake or the Humboldt River, intermittent and ephemeral streams are not perennial, meaning they do not retain water or streamflow throughout the year. For further clarification, intermittent streams are seasonally flooded; they only flow during the spring in response to snowmelt and then dry up by the end of the summer. Ephemeral streams only flow in response to precipitation. According to the Nevada Division of Environmental Protection, about 90% of our state’s streams are intermittent or ephemeral. Both are vital in our desert ecosystem as they provide nutrients and habitat for desert dwelling species.

Intermittent streams flowing from the south-facing slopes of the Ruby Mountains provide ideal breeding habitat for frogs, insects, and other macro invertebrates that are preyed on by fish. Every year frogs will migrate to these streams.  Seasonally-flooded shallow depressions are known as vernal pools, and they serve as mating grounds for many frog species. Their jelly-like egg sacs can be observed along the banks or edges attached to rocks, twigs, or debris.

Rain or shine,  get outside and look for evidence of streamflow! While empty streambeds may not look like much during most of the year, now you know how important they are  for desert-dwelling species. Water is what allows the desert to spring to life!