While it may not be far, it is quite a unique historical trip! Lovelock Caves, located 18 miles outside of Lovelock, NV, is a perfect day trip for those who want to get out of the house but may not have the resources to go on a big excursion. The cave itself is surrounded by a short hike, about a half mile in total, where it features several numbered stops along the way featuring plants, animals, and geological formations that are key factors to the cave's importance. 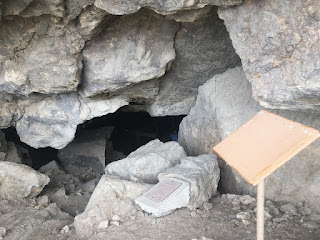 Lovelock Cave is well known for its historical findings of artifacts including duck decoys, arrowheads, human remains, and bat guano. The duck decoys were one of the greatest discoveries in the cave. Eleven duck decoys were found in total, and at 2,000 years old they are the oldest duck decoys found anywhere in the world! Many of these artifacts are located at the  National Museum of the American Indian of the Smithsonian Institution, including the original duck decoys. The Cave received the heaviest use between 2,000 BC and 1,000 AD during which water was more plentiful and the area was rich in plant and animal resources. Unlike today, where it is warm and much dryer with the decline in the lake water. 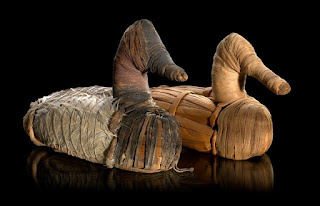 Duck decoys, circa 400 BC-AD 100, are in the National Museum of the American Indian of the Smithsonian Institution. (Courtesy/Ernest Amoroso)

Lovelock Cave is on the National Register of Historic Places, making it one of many sites in the United States that are key to interpretation of our nation’s past and present. As an honored place, Lovelock Cave deserves our admiration and respect. Please follow the Leave No Trace Principles and “leave what you find” so others after you can come and enjoy the same scenery that you did.