Any seasoned Dutch oven cook can tell you of the stories where the cooking just did not turn out as planned.  Raw, over-cooked, burnt, too salty, too bland, the possibilities of things going wrong are numerous.  But that does not stop cooks from cooking.  Sometimes the cause of such flops are cook-made, sometimes nature-made.  Regardless, scars on their fingers from the hot coals and scars on their hearts from flopped dishes does not diminish the spirit to adjust, learn, and cook again.

Nevada Outdoor School has the same spirit.  Like every other nonprofit, business, and family, the current pandemic has forced us into a time of adjustment, learning and then cooking again.  Our 12th Annual Buckaroo Dutch Oven Cook Off was held on September 12th utilizing a virtual platform.  While attendance was low online, the five teams that participated enjoyed the experience.  Teams joined the event from as far away as Washington and Virginia, with some local favorites from Winnemucca.   Team Mario Bros was powered by Kyler Enochson and Kayden Yowell from Winnemucca.  Team Dutch Oven Dandy’s is a father and son team made up by Russ and Chad Yowell, from Winnemucca.  Team Dutch Oven Deb and her Dude represented Washington state with Debra and Brett Basquez in virtual attendance.  The Western Cooks was the mother and daughter team of Sarah and Catherine Welsh of Winnemucca.  Rounding out the competition was the RockScars from Virginia consisting of Michael, Jessie and Scarlett Myers.  That is one of the perks of technology, no travel needed so showing up in Winnemucca was not a requirement this year.

While the hosts on the other end of the camera did not get to eat the food, there were envious taste buds and mouths watering as the cooks fed their family and friends.  Main dishes included Lasagna, Shrimp Meatball Clam Chowder, Pork Loin Roast with Chipotle Cranberry Sauce, Lime-infused Chicken Enchiladas, and Herb and Bacon Wrapped Pork Tenderloin.  Three teams also made desserts, Peach Pie, Pineapple Upside-down Cake, and Coconut Macaroon Cookie Bars.  Scorecards were completed by the host and hostess of the event, Mr. Eddie Booth from Vision West Realty and Mrs. Melanie Erquiaga, Executive Director of Nevada Outdoor School, as well as, technical troubleshooter and Outdoor Ethics Program Director, Miss Allana Havernick.   Each dish cooked by a team was judged individually.  Judging criteria were willingness to share the recipe, originality of dish, dish origin, visual presentation, taste, and interaction with spectators and host.  Dishes could also earn extra points for utilizing a unique ingredient. 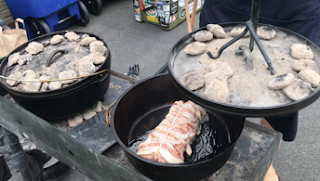 Preparation was done off-screen, but cooking was captured live during the Facebook Live event and teams regularly interacted with the hosts answering questions and providing updates on their food.  At a prescribed time, the cooks presented their food for visual inspection by the hosts and consumption by whomever they had invited to their backyard.  It was a close competition, but third place went to the RockScars of Virginia for their Pork Tenderloin.  Second place went to the Western Cooks of Winnemucca for their Pineapple Upside-down Cake, and first place went to Dutch Even Deb and her Dude from Washington for the Pork Roast.

Time was passed during the event watching several videos about the impact that Nevada Outdoor School has on the state of Nevada.  Musical intercessions were provided by Elizabeth Cadigan who specializes in northern Nevada desert songs with her ukulele in hand.   Elizabeth delivers important messages about ecosystems and human behavior necessary to maintain a healthy desert environment through light and fun songs.  Learn more at facebook.com/ElizabethCadiganMusic.   Her songs are also available on Amazon and CD Baby.

Nevada Outdoor School has great hopes that next year the event will be back at Vesco Park in Winnemucca and there will be hundreds of people fed delicious food.  In the meantime, in the near future, check out a video summary of the event and recipes at nevadaoutdoorschool.org.