During the week of August 6th-9th, Nevada Outdoor School held its annual Boy’s Camp at Leonard Creek Ranch near the Pine Forest of Denio. During this camp, boys ages 10-13 participated in three days of fun outdoor activities that included fishing, archery, and sports games. One of the most fun aspects of camps is that we are able to help campers experience activities that they haven’t participated in before.

On the first day of camp, the boys were able to learn survival skills such as shelter building, what to bring in their day pack, and how to start a campfire. Using a piece of twine and a magnesium stick, all of the boys were able to light their own small campfire. They were then split into teams and given a tarp to make a shelter with. Finally, they were given pictures of items they wanted to pack in their hiking bag, of which they had to choose ten.

On the second day of camp, we took the boys to a small farm pond. Although most of the pond was covered in moss, we found a small area with a dock that went out to a clear area of water. Over the next couple of hours, they were able to catch and release nearly 30 bluegill. For some of the campers, this was their first experience catching a fish and watching the excitement as they reeled in one after the other was very rewarding. 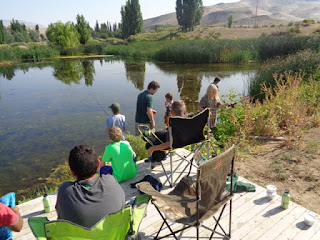 The next day, campers learned some basic archery skills and spent the morning and evening shooting longbows. After an orientation about safety and basic archery techniques, the boys spent the next couple hours practicing their skills and trying to hit the target. Since afternoon temperatures were very hot, we spent our time in the pool or playing games in the shade.

At our campfire programs, campers were able to participate in a talent show. We had a deer walk right up to us, and the campers were good about practicing Leave no Trace and leaving it alone. We spent the rest of the evening making hot dogs, s’mores, and telling stories around the fire. It was a fun week of making new friends, playing games, and learning new activities. In the future, we hope to incorporate activities like archery, fishing, and survival into the rest of our camps as well.